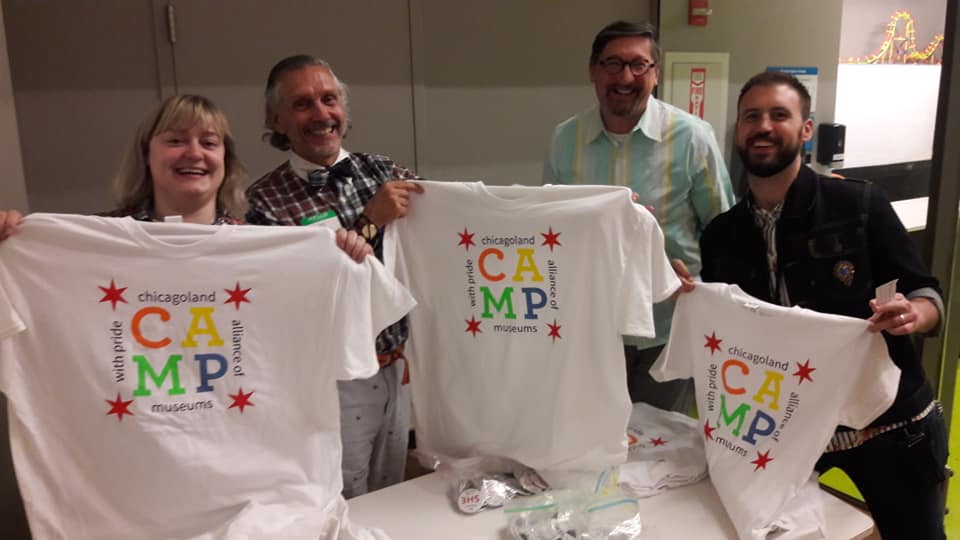 When I first moved to Chicago and started pursuing a career in museums, I questioned whether I would be embraced for my whole identity in my workplace. The more I engaged with the Chicagoland Alliance of Museums with Pride (CAMP), the more I felt at home in the museum industry.

In honor of Pride Month, I sat down with Katie Slivovsky, CAMP’s co-founder, and Miranda Pettengill, CAMP’s communications manager, to learn more about the ways CAMP is making museums more LGBTQ+ friendly for staff and visitors.

How CAMP got started

CAMP is an outgrowth of the LGBTQ+ inclusion efforts at the Chicago Children’s Museum (CCM), which began in 2011. After CCM put up rainbow symbols and all-gender bathroom signs, Katie started getting calls from other museums, particularly museums in Chicago. In response, several individuals from Chicagoland museums started meeting informally to discuss LGBTQ+ inclusion. In 2017, Katie and her compatriots inaugurated CAMP.

Miranda began attending CAMP meetings when she moved to Chicago in 2017. “I joined CAMP because I love museums and I love being queer,” Miranda related. “I was so overjoyed to find an organization that was at the intersection of my identities and other people who were passionate about the same things I am.” When the opportunity to join the CAMP Council, a group of volunteers who organize CAMP meetings, arose, Miranda jumped at the chance.

CAMP has created a community for the pioneering museum professionals who are pushing for LGBTQ+ inclusion. “Between all of us at CAMP, there’s someone who’s done everything,” Katie laughed.

As the only queer person on her small museum staff, Miranda feels grateful that CAMP provides a supportive community that values her efforts at LGBTQ+ inclusion. “Sometimes it feels scary to be the only voice advocating for LGBTQ+ inclusion, but CAMP has solidified my confidence that this is a really important professional issue for museums,” Miranda said. “CAMP has given me strategies for how to advocate for myself and how to make visitors feel welcome. As a cis person, I didn’t necessarily know the best strategies for making trans people feel welcome, but learning from trans people at CAMP has helped me. For instance, we only have single use restrooms in my museum because it’s an old historic mansion. They were gendered. I advocated for them to be gender neutral. My boss and colleagues were super receptive, they’d just never prioritized it.”

CAMP helps participants remember that even their small acts of inclusion make a big difference. Katie related that one of her favorite CAMP stories was when a volunteer coordinator at a nature museum put a rainbow triangle on her office door. “Volunteers slowly started mentioning their same-gender spouses and transgender children to her,” Katie related. “You can make a big difference with a small act. She didn’t have to ask anyone to put a rainbow sticker up, she just did it.”

While visitors may not know CAMP exists, Katie believes “CAMP is expressed in all these individual museums and visitors are loving it. Inclusion feels good. It’s like moving towards the light.” As Miranda stated, “CAMP improves museum visitor experience because it empowers museum employees to make inclusive changes in the workplace. I know that personally, I have made some specific changes in my workplace due to CAMP: getting our single-use restrooms changed to gender neutral, putting my pronouns in my email signature and encouraging my coworkers to do the same, calling the adults in family groups ‘grownups’ instead of ‘mom’ or ‘dad.’ I hope that even small steps like these have helped make my museum a more welcoming and inclusive place for visitors.”

Role of Allies in LGBTQ+ Inclusion

As a straight cisgender ally, Katie believes it is her responsibility to, “show up, shut up, shoulder the burden, shake off mistakes, and share the work.” Katie feels that the onus of community organizing should not fall to LGBTQ+ people alone. “I learn from LGBTQ+ people about their experiences and try to influence my community. I try to connect the dots for other straight people.”

However, Miranda and Katie both feel that LGBTQ+ people should have a larger say than allies say in how LGBTQ+ inclusion looks and operates. Miranda runs CAMPout, CAMP’s LGBTQ+ affinity group, along with Calgary Haines-Trautman. Miranda maintains that CAMPout needs to be able to veto or endorse CAMP activities because CAMPout is the queer voice. Katie agreed, stating, “in the future, CAMPout could end up being primary and CAMP secondary.”

CAMP aspires to expand and diversify. Miranda hopes that CAMP can find ways to encourage more people of color and transgender individuals to join the CAMP leadership team. She also wants to get more museums involved and is in the process of developing a formalized outreach plan.

CAMP is also exploring the possibility of creating a CAMP certification for Chicagoland museums. CAMP would use the AAM Welcoming Guidelines for Museums, add Chicago-specific protocols, and give museums a badge for meeting expectations.

Mostly, Miranda and Katie just hope CAMP can make museums better for the next generation. “we know that children must see themselves, their gender expressions, and their family structures reflected in their world; it’s simply what’s best for kids.” Katie asserted. “I try to light a fire in the hearts of straight teachers and museum professionals who work with children to do everything they can to make those children and families visible, welcome, and included.” On a more personal note, Miranda divulged, “museums were my happy place when I was a kid. When I was a kid people underestimated me. The only place that didn’t happen was museums.  I went into museum education because I wanted to give all kids that magical experience. Museums are full of contradictions. Museums are patriarchal, elitist, white, but they’re also beautiful spaces where you can be anything you want to be. I didn’t know I was queer when I was a kid, but a lot of kids do. I hope CAMP can help Chicago museums become that magical space for queer kids.”

Resources for LGBTQ+ Inclusion in Museums